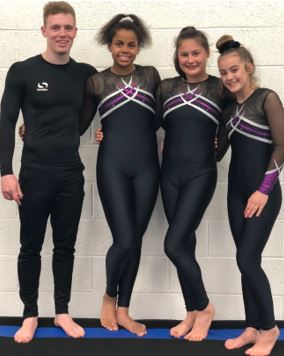 Four Team Gym Gymnasts from Leatherhead & Dorking Gymnastics Club have been selected by British Gymnastics to represent Great Britain at the forthcoming UEG ( European Gymnastics) European Team Gym Championships to be held in Portugal. The gymnasts are Emily Odunsi and Rianna Hodgson who will compete in the Junior Women's Team, Nick Harris in the Men's Senior Team and Anne-Marie Cobb in the Senior Mixed Team.

The four gymnasts selected who are coached at Leatherhead by Charlotte Heelas (Head TG Coach) and Kim Skelton, are members of the successful teams who won British Titles in April at the National Championships finals in Newcastle.